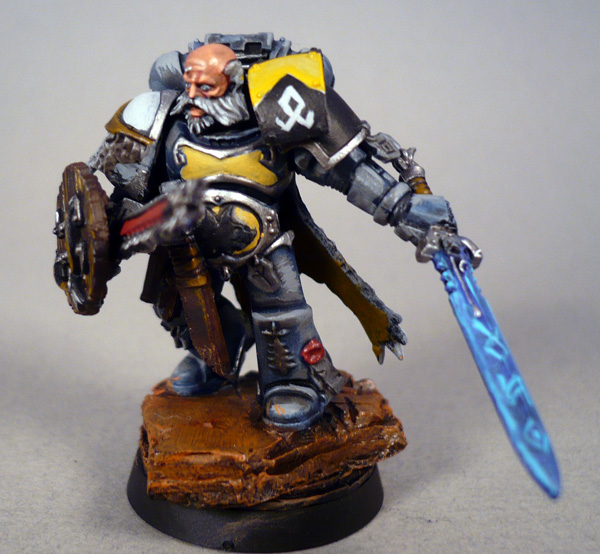 Not a mighty Wolf Lord, doesn’t have any special abilities that give preferred enemy, or grant psychic defense.  He is the underdog of the Space Wolf HQ section (No pun intended).  However, they hold special place in my heart because of their access to Saga of the Hunter.

Different load outs can change the personality of this unit in a various ways, from stealthy shooter to outright a close combat monster.  I have designed a few potential uses for them, some more exciting than others have, some more tactical then others.

Option 1: Silent Prowler-160 Points: Thunderwolf Mount, Saga of the Hunter, two Fenrisian Wolves, and a Power Weapon.  For only decent amount of points, you get a unit, which can get you into combat quickly, but also absorb many of those nasty plasma weapons that hang around now a day.  The Thunderwolf grants that extra little toughness to take less wounds, but also gives you Rending to deal with those 2+ armour saves when a situation arrives for the need.  This one is all about cover and speed, not much else.
Option 2: Plasma Jet-135 Points: Jump Pack, Two Plasma Pistols, and Saga of the Beastslayer.  This one is more of a fun unit, jumping around with Plasma Pistols, taking on the biggest and toughest things on the field.  Yeah he might blow himself up.  Yeah he might get shot up before getting a shot off.  That is not the point, it is the fact you could deep strike this guy wherever you felt like it and get two BS5 S7 AP2 Shots off that on a roll of 6 get to choose who he hits, and rerolls to hit against Walkers, Monstrous Creatures, and the like.  He if fun, that is what I really care about.
Option 3: The Watcher-83 Points: Storm Bolter, Saga of the Hunter.  This is the setup I personally am going to use when I start my space wolf ally.  He is nothing special on his own, but with his ability to grant stealth to the unit, he makes a perfect candidate for Sternguard Vets and other shooty units.  He is the leader of a squad; he keeps units in the game when the shot should have killed him instantly.  He can move to nearly any rear squad can grant them so much.  Attach him to sniper scouts who already have camo cloaks and give them a 5+ cover in the open!  Stick him with your long fangs and devastator squad and watch them survive that extra turn.  He is cheap, simple, and brings so much too any unit he is added too.
Option 4: Fanged Wall-145 Points: Terminator Armour, Storm Shield, Frost Axe.  This guy is built to take the hits, and dish them back.  He usually always gets 4 attacks charging or not, thanks to Counter-attack.  He is cheap for what he brings, and can be easily backed up by a group of three wolf guards.  They can be dropped in a pod, or driven up in a raider, or just foot slog it over to the enemies end to claim a victory point.  He is not to be messed with, and he would easily make a mess of anyone who tried.

I like the wolf guard battle leader, mostly because you don’t have to put much points in him to enjoy him.  In the age of challenges and plasma, deposable HQ’s can be nice.  I say make units to be fun, especially if it’s a space wolf, they have such unique personalities to the army you can pull off nearly any unit combo and it fits the theme.

I challenge anyone who reads this, to make a unit that sounds fun, and can be a one off’er.  It does not have to be a space wolf, does not have to make sense, it just has to be FUN! It is like your guard ten man squad, assaulting a deathwing knight squad, you do not do it because it makes sense, you do it because it would be cool to see if they could actually do something!