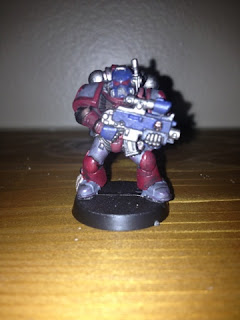 This is to be the Colour Scheme of the Angels of Silence, I had old starter kit ultramarine models hanging around so I decided to do some painting to get the ball rolling and this is what I came up with.  Granted the paint job isn't the greatest, but it was a trail model which I tried hard enough to make sure I have a model to work off for painting the rest of the army.  A little side note, up close flash and my inking doesn't look good together. Camera phones eh? Another little side note, I did not use a speck of black paint other then the primer on this model, too many models have black as a colour included and I wanted to put a stop to that since my old army looked like black templar rejects

What do you guys think of the colour scheme?
Posted by Unknown at 9:28 AM