My Magic is Better then Yours 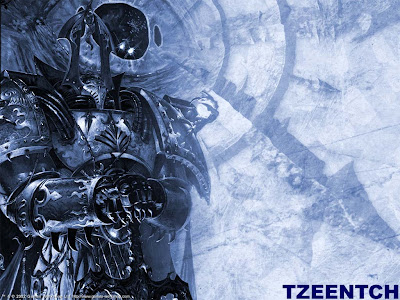 From the first time I gazed into the Chaos Space Marine book, I fell in love with the Sorcerers.  They first break in a 100 point Space Marine Psyker and the shear amount of options they were open to them.  The 25 point cost for Mastery Level, and up to three of them no less.  Being able to actually switch a shooting weapon for another close combat weapon was so amazing to me, a Sorc with a force sword and a powerfist.

I like the return to 4th editions Armoury selection as a hybrid with the 5th edition selection.  It reminds me of the days where I could field a Librarian with a Iron Halo and Artificer Armour and making him a close combat smiting monster.  It makes the selections you have access to so much more, and opens up so many different combinations that people can spice units up to fit their own fighting style.

The following is just a small example of what can be done with some of these combo’s.

Option 1: Alpha Legion - 63 Points: Combi-Bolter.  This guy can be fielded using Telekinesis, as well can be easily hidden in a troop of regular space marines, as in the nature of the Alpha Legion, and surprise your opponent with a sudden flash of instant death, or a blast of psychic energy ripping apart a group of troops.  This is a basic build for lower point battles or in games fielded a couple ‘tac’ squads and a ton of cultists.  Believe me when I say this, the less flashy the model the more chance someone will forget you HQ is even in the squad, it is like well positioned snipers, even you forget they are there.

Option 2: Lord of Tzeentch - 220 Points: Power Weapon, Mark of Tzeentch, Disc of Tzeentch, Sigil of Corruption, two additional spell Masteries, Gift of Mutation, and a spell familiar.  Rolling two spells on the Tzeentch table and another on Biomancy gives you a healthy hard hitting selection.  This guy is tough, 1+ attack and Toughness 5 because of the disc being a Jetbike, a 3++ Invulnerable save and having both his Force Axe, and a Power Sword, the gift of Mutation doesn’t have to be taken, but since the first one you re-roll the bad stuff, it helps buff you, and the spell familiar gives you peace of mind when casting your spells.  He can move about the field, blast things apart and hit into combat and do decently well.  He costs an Arm and a Leg but he is damn fun to play in the end it things go your way, might just get luck and roll feel no pain of another 1+ to toughness.

Option 3: Foul Punch - 200 Points: Power Fist, one additional mastery level, Sigil of Corruption, Blight Grenade, Ichor Blood, Mark of Nurgle, and Palanquin of Nurgle.  This guy is also expensive, and could get more expensive if you felt like it.  His Toughness 5 and 4 wounds will keep this guy alive, stick him with plague marine marines and just watch him ooze forward spreading Nurgle’s Gift.  The Power fist helps him with Instant deathing Space Marine hero’s as they try to hurt him in assault.  The 4+ Invulnerable save helps keep him alive against most heavy hitting attacks but he is also able to dish it out back with his psychic .  Taking a Nurgle power and a Biomancy Power might actually make this guy super strong and tough to beat.

Option 4: Undivided Power - 125 Points: Terminator Armour, An additional power level, and a Spell Familiar.  This Option is very cheap for what you have access to, you have a simple 2+ armour save, and a 5+ invulnerable save.  So far you are better off than a regular space marine Librarian and then to make it better for half the cost you have access to an addition mastery level, and re-roll your failed attempts.  At this point level this guy is tough not to consider, he isn’t flashy he doesn’t have a mark, he is just a Renegade Librarian who is really good at summoning powers.

I could list more and more of these combo’s, they are all personally favorite choices stuff I’ve fiddled around with.  Chaos nowadays with the new codex just seem more lively and the amount of choices you can make with the various units bring all kinds of options to the table.  Some people don’t like the new codex, I personally think it was well written and now for us fluff bunnies we can make such a variety of armies and actually make all nine traitor legions from the codex.  I like the thought of making unchaos renegade army that has no daemon influence but uses the traitor codex to get access to mighty HQ’s, good chosen units, and auto cannon dev’s.  If you haven’t given the codex a chance, look again, feel the potential.  Its not the DA Codex, but it doesn’t mean it’s a bad codex.  No other codex has poisoned 4+ close combat weapon, T5, 3+ FnP elite/troop choice that can take double special weapon.

Give Chaos a chance, they have cookies.
Posted by Unknown at 10:54 AM