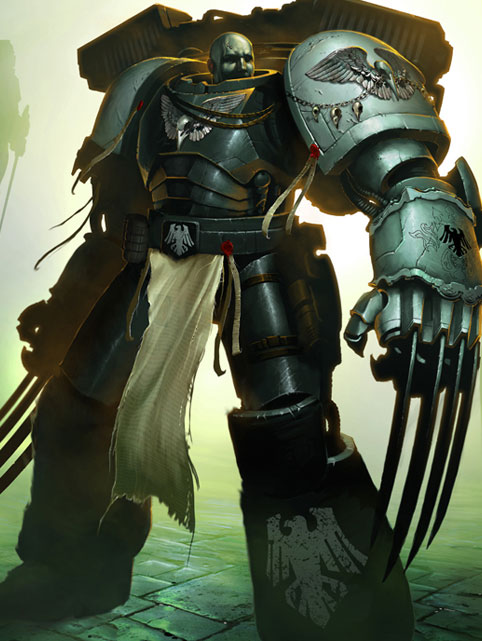 Okay to start this list off I wanted to say I really like Shrike and the Raven Guard; I have a soft spot for those beaky blokes in there black armour and wolverine claws.  They are a very tactical Army to play and you really have to use your scouts to full advantage in their army.  Can’t just play full Power Armour because it ruins the spirit of the army.  I’ve designed a 2k point list that I believe has the right stuff to be a fluff Raven army.

HQ:
Shadow Captain Shrike
Mandatory for this list seeing has he is the representative for the Raven Guard Army, and just so damn cool in what he does, and gives an entire army fleet, which in 6th can be a life saver to say the least when hitting into assault.

Troop:
1 Tactical Squad
I have outfitted the squad with a drop pod, plasma gun, missile launcher, and a power weapon on the sergeant.  This squad will come down via drop pod with drop pod assault and try and hurt anything in the enemies’ side of the field with plasma fire and snap fire missile.  Mostly used as a distraction unit to allow the rest of the army to move up and do what needs to be done.

3 Scout Squads
I’ve added three ten man squads of scouts to the list; these guys are outfitted to be combat squads, four guys with sniper rifles and a guy with heavy bolter, and four guys with combat blades and pistols with the sergeant a power weapon, melta bomb.  These guys all have camo cloaks to keep them nice a stealthy.  I feel that with fleet and this load out, these scouts can cause some serious harm to most unprepared squads. The snipers picking off special weapons and characters and using the hellfire round from the heavy bolter to do blast sniping to whittle down squads.

Fast Attack:
1 Assault Squad
This group of ten guys are what will be backing up and working with Shrike, I would have stuck him with a vanguard veteran squad however that would be very expensive and you loose what you guy from using the vets, the assault on deep strike.  These guys are very simply set up, the sergeant has a power weapon and melta bombs.  Its simple and easy and they can dish out a lot of attacks with very little worry, also the sergeant can be used for challenges to save shrike from big meanies that they might encounter.
1 Vanguard Veteran Squad
These guys are setup in a five man team, and are going to take advantage of fleet and assault off the deep strike.  I’ve outfitted them as follows, sergeant has two lightening claws, and a melta bomb, the four others have melta bombs and a power weapons.  These guys are meant to be a unit that hits the biggest and meanest things on the field with a decent deep strike roll and using fleet they are more likely to entire assault and survive to do damage that they are outfitted to do.  Melta bombs are there so they can hit tanks and MC as hard as humanly possible.

1 StormTalon
I need to add a flyer defense to the list and this seemed like the best choice, I’m not a huge fan of flyers myself but utilizing them needs to be done to survive in the current meta.  I outfitted this baby with Twin-Linked Lascannons and Typhoon Missile Launchers to give that anti-tank flavor that this list lacks.  A flyer seems to be a prefect fit to an army like the Raven Guard and I think it would do the army good.

Heavy Support:
1 Devastator Squad
These guys are outfitted with four very expensive Lascannons, the reason I chose these was because the list lacked heavy support, and these guys are able to hang back with the scouts and ‘snipe’ tanks and change targets very easy especially if they can a center place deployment.

Fornication:
1 Aegis Line Defense
I have added this to hang out with the Devastator squad and I added the Icarus Lascannon to the list to match the Dev squads’ lascannon outfit.  I like the wall, it helps give a tactical position to a unit that doesn’t have to cover a objective until the Big Guns Never Tire mission.

This is has plenty of Troops to move around and take objectives, plenty of in your face units and enough holding the back field units.  A lot of movements to be made and a lot of feints to be played with the moving your troops around.  This is has a whopping 63 unit and vehicle count and its divided even between power armoured, and scout armoured.  I think it anyone likes the fluff of the Raven Guard and wants to play a list that is new and lacks the same unit setup of every other list out there then this one can, no dakka dreads, no huge spamming of units expect scouts but being only two troop choices you’ll have to go one way or the other.

I would like to hear what you guys think of my thoughts on Raven Guard, maybe tell me what I could change to make it more Raven Guard fluffy.

Note: Blood Angels could be used with this, but I enjoy the fleet a little to much to loose it but the Vanguards would always show up d6 close to the enemy, and rolling a six is a 50/50 shot for assault.
Posted by Unknown at 10:00 AM