Skeletor of the 40k World 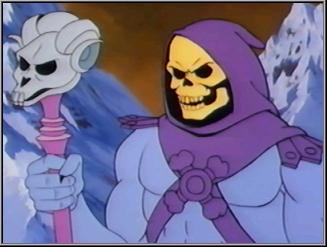 The Chaplain, a very nice unit to use to help buff yours units in assault, this unit is rarely fielded in the Vanilla codex, which is sad since he just has the spunk that you need as an HQ and he has an attitude to match it.  Skeletor as I like to call him grants those handy re-rolls in the first round of combat and also has a mighty Strength 6 hit in close combat.  Yeah I know AP4, but really it doesn’t always matter, the hits and wounds will cause deaths, just let him do his thing.

I’ve made a couple setups for this model and fun ways to use him, hopefully you get some use out of it, and maybe even use one once.

Option 1:  Skeletor - 100 Points:  He has no equipment other than what he starts with.  Bland and blank but even like this he is perfectly set up for attacking, no addition, no need to add weapons or equipment.  He is a formidable force to fight anyway you look at it.  Also outfit him with a staff with a dear skull on the tip of the staff if you feel inclined to fit the look.

Option 2:  Flying Hate - 150 Points: Jump Pack, and a Power Fist.  It may seem simple, but he now can move up field quickly attached to an Assault Squad who already are a force to be reckoned with, but with the Flying Hate you get tank busting, hero cracking, unit smasher.  He can choose to hit I4 or I1, S6 or S8, he also comes with W2 and 4++ save.  How can you go wrong with that? Don’t answer that.

Option 3:  Light the Way - 135 Points:  Terminator Armour and Combi-Flamer.  Still seems too simple to be any good, can never forget what he already has and what you would have to pay for anything is super cheap.  Got to love a unit who only needs a few extra’s to become a bigger super hero.

Option 4:  Road Warrior – 155 Points:  Space Marine Bike, Plasma Pistol, and Metla Bomb.  This guy isn’t happy, and he is very angry, chaos beware when this guy comes wheeling towards you, T5 with a 4++ save, its going to be hard to really hurt him.  The plasma pistol gives that little extra damage you need to higher Toughness and lower AV vehicles.  If your going bikes, he needs to be in your command squad, get all those nice power weapons with re-rolls to hit first round of combat and also getting the attention of the Challenges to protect your really well outfitted HQ.

There isn’t many more choices you can have with this guy, however he is made for assault and if your army is trying to be geared to towards that, he will be a benefit to say the least and never really costing a lot of points leaving you free to fill your roster.

Yay or Nay for the Brave Chaplains guys!
Posted by Unknown at 10:00 AM